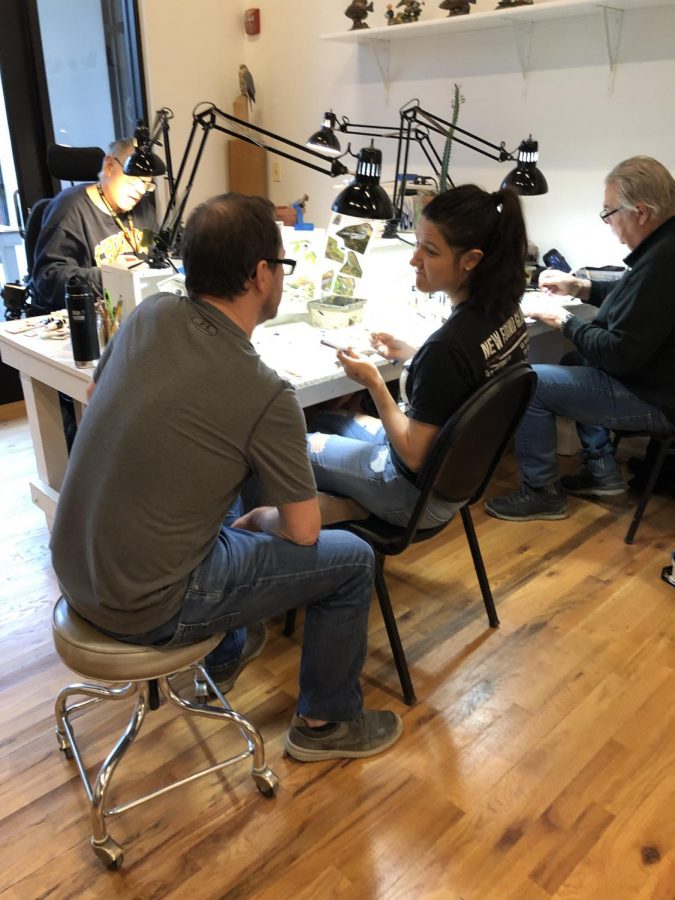 Josh Guge and woodcarving student Randi Fowler talk about the detailed painting process of her sculpture that captures the beauty of the bird's colorful feathers.

World champion woodcarving artist, Josh Guge, spends his time creating sculptures that capture the natural beauty of animals living in their diverse habitats. According to Guge, he has been exposed to the art of wildlife woodcarving for his whole life thanks to his father, a forerunner of this specific artistic movement. What started as a family tradition became a purpose of life for the Guges when they became well-known for their awarded wood sculptures and opened the Guge Institute of Wildlife Art in Elgin.

Guge became serious about woodcarving while observing in his father’s studio in their house growing up and always learning more about the process from his father’s mentoring. Guge’s father influenced his passion for studying an animal and creating that image in their natural environment from the detailed woodcarving process of sketching, shaping, detailing and painting.

As his woodcarving skills grew stronger, Guge followed his father’s footsteps in the art of wildlife sculptures and began carving with his own style of creating fish in tropical ocean reef environments.

“When I was in second grade, my family and I took a trip to Hawaii, and I was blown away by the fish and the creatures underwater there,” Guge said. “That was the scene I wanted to recreate and that stuck with me my whole life.”

Fish and coral reef environments became a signature style for Guge through his professional career as an artist. Steering away from his father’s reputation of carving birds, Guge used what he learned from his experiences at home to bring each fish the detail of movement and color in the same way his father would carve birds. Guge became familiar with the fish he was creating through studying its behaviors and reading more about the life underwater. According to Guge, he enjoyed starting his learning process from his father’s love for birds, but he knew saltwater fish would be his way of separating his own success from competing directly with his father’s.

Even though his style was different, Guge still used precise detail in his sculptures and recreated clear wildlife features, which was passed down from his father. Guge uses specific adjustable rulers to carve accurate measurements for life-like characteristics on the animals and carefully map out every detail before making the permanent cut into the woodblock with the Dremel tool. Guge also works with different mediums of paint to give animals their blend of colors to match the exact pattern of the beautiful colors that come from nature’s creation.

According to Guge, he uses a paintbrush on the wood for base colors and specific details, but he gives the animal its texture with airbrush paint. With airbrush, Guge can apply a spray of the paint to create spotted blends of multiple colors. This gives the fish a life-like feature of colorful scales glistening in the ocean and also gives birds their distinctive pattern of colored feathers. Guge was passionate about becoming a full-time professional woodcarving artist, and at the age of 13, Guge sold his first piece to an art gallery in Door County, WI.

“I really enjoy the whole process of creating my sculptures and creating something new,” Guge said. “But I would say my favorite part of the process is finally getting to paint the animal and watch the colors really bring the sculpture to life. It takes so much preparation to get that far in the project, and once the painting starts, you really get to see the whole piece come together.”

Guge’s recognition as an artist was growing more independent and became much more than just being in the shadow of his father’s success. At age 17, Guge won his first competition for a salt-water sculpture and sparked determination to keep sculpting at a higher level until being able to compete for Best In World for the open level at the World Fish Carving Championship. After watching his father’s successful career winning Best In World five times, this became an accomplishment Guge had been waiting for his whole life.

In 2007, Guge entered his first open level competition at the World Fish Carving Championship and didn’t take home any awards, which motivated him to work even harder on his next project for the 2009 competition.

In 2009, Guge’s determination in following his dream of recreating the image of snorkeling the coral reef in Hawaii finally paid off when the judges of the World Fish Carving Championship saw exactly what he was capturing in his sculptures. Guge won Best In World saltwater fish sculptures in both life-size and miniature categories and also an award for the Best Of Show, Judge’s Choice at the World Fish Carving Championship in 2009.

“I’ve always been a competitive person,” Guge said. “It brings out the best in me when I know I’m going up against the best in the world, and that’s a feeling that will always be a motivation for me to keep pushing myself to get better when I start another sculpture for a competition.”

Guge is now a three-time Best In World Champion and has been awarded prestige accomplishments from various competitions such as his Best Of Show awards at the International Wood Carvers Congress. According to an interview with Guge on his website, there is a lot of value in becoming a recognized champion at these competitions. Guge says that the recognition helps more art galleries get a view of his artwork, and then there’s more interest in buying Guge’s work, which supports him as a full-time artist.

Guge’s artwork became an experience for the viewer as his sculptures became more in-depth. According to Guge, his work at the beginning of his career was capturing everything exactly the way it was in nature. Now, Guge has a way of experimenting with color and expressions of the animals to give his sculptures a deeper meaning within the realistic depictions.

Guge recently finished a sculpture titled “Saw Whet Owls”, a sculpture of a mother owl perched on a top branch looking after her two young owlets from above. Guge sculpted the mother owl with a fierce expression in her wide eyes and a stiff posture on the branch. Guge created the mother owl looking directly at the viewer and then seeing the young owlets fluffed up together with sleepy and innocent expressions to illustrate the idea of protective mother in nature. According to Guge, he wanted to capture the threatening look a viewer would get when they approach an attentive mother owl looking after her two owlets, and he explains how the owl’s expression has its way of telling somebody to back off without the need for further communication.

“The owl piece Josh created makes me think about how a mother looks after her young,” Elgin Community College student Michelle Witt said. “I am amazed at how much detail he was able to get in this piece, he really captured everything from the eyes of the owls to the branches that support the sculpture.”

In 2004, Josh and Bob Guge opened the Guge Institute of Wildlife Art in Elgin. They were well-known in the industry of woodcarving and they were often scheduled to teach seminars at competitions across the nation. Opening their own studio and institute in Elgin was a way for them to keep their doors open to the community around them. They began an open studio class for around 8-12 people at a time where students could sign up for beginner lessons instructed by the Guges.

According to Guge, teaching the woodcarving process became another passion that the Guges were able to experience together when they saw the interest people had in learning from them. Many of the students that go to the Guge Institute’s open studio have been regulars from when they first began teaching.

In November 2013, Bob Guge passed away from a battle with a brain tumor and officially left the tradition of Guge’s woodcarving to his son. Guge still teaches his open studio’s in Elgin with a full class and travels to other competitions throughout the year to compete and also teach his own 3 to 4-day seminars.

According to Guge, he loves seeing the work his students complete, and it makes him feel good as an artist. The students that learned from him and his father caught the passion for creating art, and they have the same equal excitement when it comes to starting a new project and watching a sculpture become a life-like animal. Guge supplies his students with the methods and the tools to create sculptures in the same exact studio Guge creates his award-winning pieces in. Guge says his students are creative and passionate, and he is always impressed that his students want to jump into the next project. They all know what they want to create next. Guge gives them full freedom in the studio; he is just there for help when they need it.

“I really enjoy teaching other people how to create these sculpture’s because a lot of people get interested in how it all works once you try it,” Guge said. “I want to share what I’ve learned from the gifted artists in my life and expose it to the youth because that exposure to art is a luxury I had as a kid, and it’s fun getting flashbacks to when I went through that.”