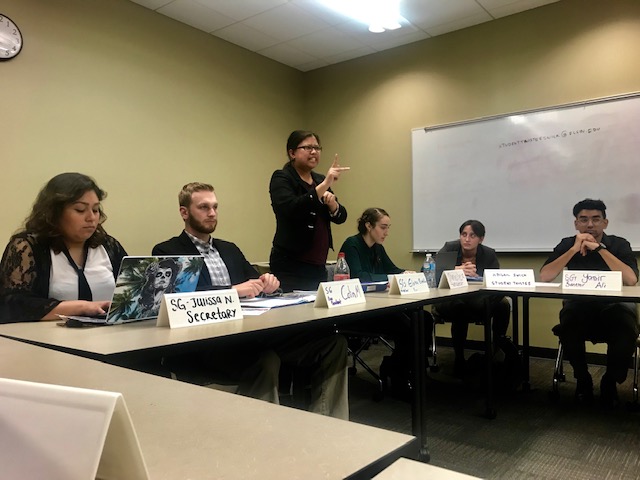 Student body president Eloisa Basilio is taking among her peers in the meeting.

When Eloisa Basilio ran for Elgin Community College’s student government, she wanted to make sure that students felt comfortable coming to anybody in the student body to discuss any concerns or issues that they have, so finding a solution can happen.

Eloisa Basilio is ECC’s first deaf person to be in office as president. Basilio graduated in 2014 and is a returning as a part-time student to continue her major for graphic design. In her free time, she is a freelance graphic designer. Working as a freelance designer, Basilio has some challenges communicating with her clients because most don’t know sign language. So she must find a way to communicate with them.

What made Basilio run for student government was that she knew it was going to be a challenge for her, but she was ready and willing to take on that challenge to better the school and give students a great experience.

“After meeting with several members of the student government they were encouraging me to run,” Basilio said. “They said I would be the first deaf person in the office, so I decided to give it a shot and filled out a paper and sure enough I got it.”

For Basilio having an interpreter makes things a lot easier when communicating to others and sometimes people forget and must understand that yelling doesn’t help. Making sure the interpreter is available all depends on how their schedule is set.

“Just because you talk louder doesn’t mean I can hear you,” Basilio said. “Not having an interpreter does complicate things because then I have to find a different way to communicate with whoever I’m talking to.”

Abigail Swick always has an interest in the leadership role since middle school and now being at ECC in student government she gets to do that. Swick is the trustee in student government at ECC and as the trustee, she is a representative of student life and the hiring and managing of the president. Swick has been at ECC for a year and a half where she is currently a full-time student with a major as biology and statistics. As the trustee her job includes creating monthly events for students, creating issue solvers, and giving it to the board for students.

Because she’s a full-time student, there is a lot to balance for Swick, which includes working, school and student government. At times, it can be very difficult managing all three.

“It is something that can be difficult handling,” Swick said. “But if you’re going to take on a lot of challenges expect to fail and be just as happy as you were to succeed. You kept trying and going and you gained experience from it, so you know what to do and improv next time around.”

Getting students to vote can be easy depending on the approach that you use. Though not every student is going to participate and vote there are ones that will and how you choose to convince them to vote is on how you come off is something that Swick learned.

“It can be difficult if it isn’t genuine. When talking to the students to convince them to vote for you it’s about reminding them that they’re peers and it’s not about having power but helping and giving them a voice,” Swick said.

This fall is Janae Williams first semester at ECC, so she wasn’t aware that there is a student government at school. Being in a new school and trying to get comfortable can be difficult.

“Since this is my first year here at ECC, I feel as though things seem okay and as the semester progresses I hope to see more fun student-based activities and things that bring students together,” Williams said.

Williams also expressed how getting more students to be more involved with clubs and things of that nature can be challenging since it’s not like high school but doing the ClubChella event was something that most students enjoyed.

“ClubChella was really fun and the food trucks were really good,” Williams said. “I really want to see more events like that. And the time range was perfect for me and it fit into my schedule, so I had a chance to go.”

Both Basilio and Swick are dedicated to making ECC a great experience for not only new groups of students that are coming in but students that have already been at ECC. They want student government to be the place where they help students succeed in not only their academic life but their life after ECC.

“Students should know that the student government is about making students comfortable enough to come and talk to us because we’re still their peers and we’re not just making rules but for their success,” Basilio said. “We want to be the resource to other resources. We’re about being the future.”