Meet the cast of “Kiss Me, Kate” 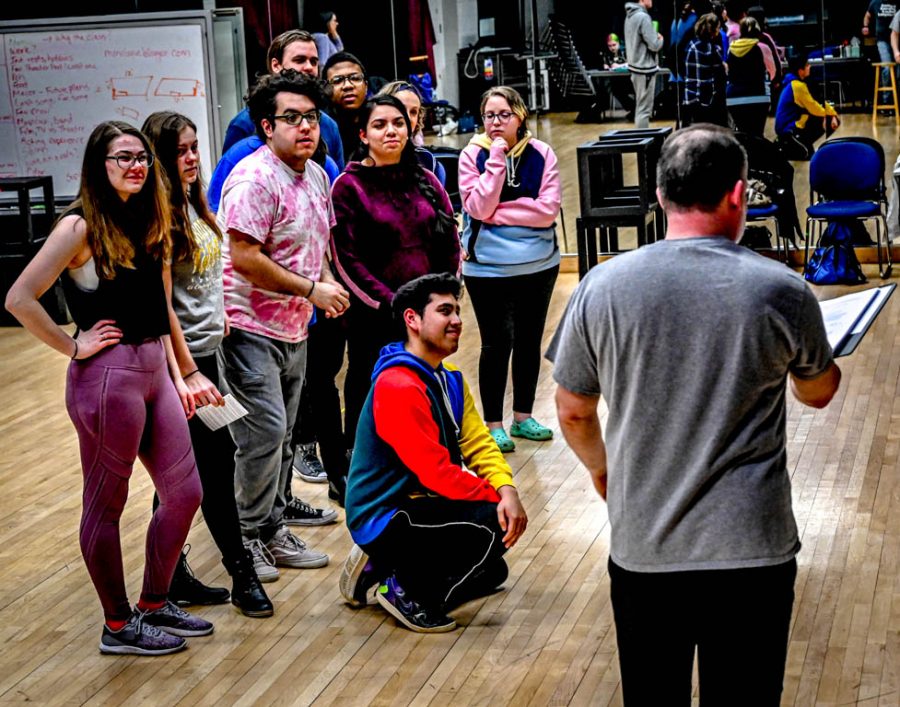 Tony Calzaretta, back to camera reads lines as the cast of "Kiss Me, Kate" looks on.

The show revolves around a retelling of William Shakespeare’s classic play, “The Taming of the Shrew.” In it, a divorced couple is brought back together through their roles in the Shakespearean play that they are a part of.

“The Taming of the Shrew” is a controversial story of an unruly woman who is forced into marriage by her father and “tamed” for the sole purpose of her younger sister being married.

I spoke with some of the cast members about their feelings on the musical.

What’s your role with “Kiss Me, Kate?”
What other theatre productions have you been a part of?
In your opinion, what is the most challenging thing about this show?
Are there any roles that you would love to play in future shows?
Who do you look up to as an actor/actress?

I play Paul and General Harrison Howell in the production.
I have been involved in over 50 theatrical productions Some of my highlights as an actor are Peter in “Company” (with Wheaton Drama), Bobby Strong in “Urinetown the Musical” and Lysander in “A Midsummer Night’s Dream” (both with the Philip Lynch Theatre) and I understudied the role of Edgar Allan Poe in “Nevermore” (with Black Button Eyes Productions). I am also an active director and serve as the Company Manager of Schaumburg Summer Theatre and am Director of Marketing for Heritage Theatre Company.
In my opinion, the most challenging thing about this show is that everyone has multiple roles. Everyone is playing someone who is playing someone and at times, it can be difficult to separate the two. You need to create a journey and storyline for essentially two different individuals.
One of my dream roles is to play Javert in “Les Miserables.” Another one is Claude Frollo from “The Hunchback of Notre Dame”.
My favorite actor is Tom Hanks. His career is so varied, I hope to have a career like that with so many different roles.

I’m an ensemble member in Kiss Me, Kate.
I’ve been in a lot of other shows, this is my 33rd show! I’ve been in shows at ECC such as Antigone, shows in my high school such as Shrek the Musical, and in a lot of community theatre shows like “The Sound of Music” and “Charlotte’s Web.”
The most challenging thing for me for this show is turning a show from 1948 into something that isn’t dated. Considering that it is a story of a show within a show, making “The Taming of the Shrew” by Shakespeare into something that is relateable to today’s society without taking away the original story is a complex process. Thankfully we have a really great directing and creative team, so I’m guided by their wishes for what they want the show to be.
I’d love to play a lot of roles, but especially Drowsy from “The Drowsy Chaperone” or Sonia in a play called “Vanya and Sonia and Masha and Spike” by Christopher Durang. In general, I think that I’d love to explore Shakespeare and other classic theatre more. When I’m out of school and in the field, I’d personally love to be a swing, which basically means that I would act as a sort of understudy for multiple parts.
I look up to Eva Noblezada because she’s only three years older than me and has already been so successful in this field. I also really look up to Andrew Rannells because he has a really great career and resume, and I genuinely just hope to achieve the same sort of diversity in my resume.

My role consists of assistant stage manager and ensemble member.
I have been in over 25 plays and musicals all across the Chicagoland area.
The most challenging thing is probably the fact that this team at ECC are so accepting and understanding when there’s conflict or mistakes. In my history of directors and such they have been stern and rude without that playful, nice side, and with the whole team it’s the best of both worlds.
My dream performance since age 7 has always been Tinker bell in “Peter Pan.”
As an actress I look up to Meryl Streep because no matter what role she has, she always slays the game.

I play Hortensio. He is an over the top suitor from Padua who has one thing on his mind… himself.
I’ve been in over 25 productions throughout the Chicagoland area. My most recent production was “Columbinus” in the fall. I’ve also been I’m productions of “The Little Mermaid,” “Legally Blonde,” “Beauty and the Beast” and many others.
Trying to interpret the Shakespearean writings is always a challenge when performing a show that incorporates it.
So many, from the Phantom of the Opera to Squidward Tentacles, though right now my current obsession is “Mean Girls”. I would love to play Damien at some point.
Again, so many people, Ethan Slater, Barbara Streisand, among many others.