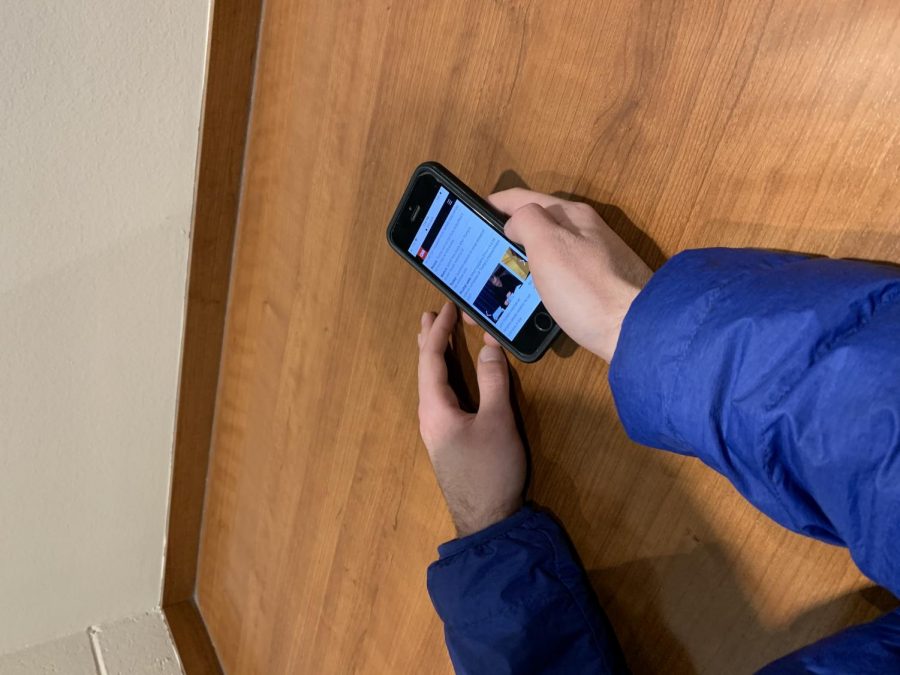 ECC student and Casten volunteer Nathan Prenevost skims Impeachment news prior to his interview with the Observer.

The Elgin area voted for the impeachment of President Donald Trump through the 2018 election of Sean Casten, who is Illinois’s sixth congressional district representative of which Elgin is a part of.

On Dec. 18, 2019, Sean Casten, was tallied in the yays along with nearly all other Democrats in favor of impeaching a sitting president for only the third time in American history.

“The facts are clear: President Trump withheld military aid to an ally, pressured a foreign government to interfere in our elections, and then systematically obstructed Congress,” Casten said in an official press release.

Historically the sixth Illinois congressional district has voted Republicans into Congress. Before Casten took office, a Democrat had not represented the sixth district since 1972.

“When I volunteered with Casten’s campaign in 2018, it was well-known it was an uphill battle against then-incumbent Peter Roskam,” said Nathan Prenevost, a second-year student at Elgin Community College. “A lot of us volunteers worked hard to win that election.”

Casten’s vote for impeachment may have an impact on Casten’s re-election chances in 2020.

“2018 was a weird time politically,” Prenevost said. “It was the first time a major national election happened after Trump’s inauguration. Many of my calls, too, constitutes as a volunteer centered around Trump and his policies. I guess for many people in both the left and the right, Trump is the figurehead of the Republican party.”

Prenevost expressed that while there was some fear among Casten supporters of the negative influence his vote on impeachment will have on his re-election, this is counterbalanced by Casten acting in accordance to his congressional oath to uphold the constitution against threats domestic and foreign.

“It is not a choice to impeach; it is an obligation that flows from our oath of office,” Casten’s press release stated. “Donald Trump’s failure to obey his oath is precisely what compels us to obey ours.”

Regardless of the outcome of President Trump’s impeachment trial, it may well be the case that it will impact the choice of voters in 2020 and who represents the Elgin area in the future.

“It’s my hope that Casten’s decision to impeach Trump in a district that might flop red next election will resonate with voters,” Prenevost said. “Hopefully those voters will note Casten’s brave stance and that, in turn, may galvanize Casten’s supporters in 2020.”