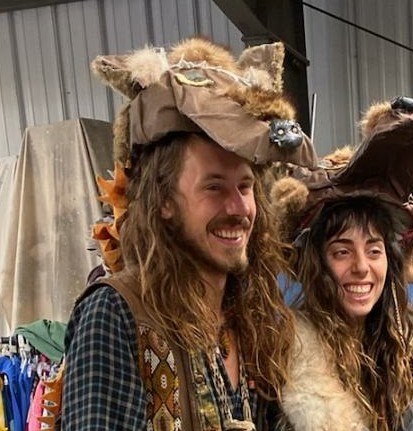 Alix Tate and friend getting their hands on handmade wolf costumes from a small performing arts theater in Chicago, November 10 2019.

Since 2010, Alix Tate has traveled to 33 different countries; learning, teaching and loving life. Tate lives what many consider to be a dream life but few know how to do it themselves.

Tate was born and raised in the suburbs of Chicago in a typical American family. He grew up attending local public schools and then Waubonsee Community College while working as an EMT and firefighter.

After graduating with an associate degree in psychology in 2010, Tate left for Oslo, Norway to look into studying at a university there. In Oslo, Tate spent two days at the college and the remainder of his time with artists creating music and poetry and allowing himself to really connect with nature.

He quit his job at the firehouse and focused on exploring this new world that he never knew existed. Tate has since been to 33 countries, including Germany, India, Panama, Thailand, Korea, South Africa and many more.

When Tate began traveling he started to grow in ways he never thought he could back home. He overcame his self-doubt, fears, loneliness and insecurities.  He’s met every type of person, from rich business people to traveling prophets. He’s been called hippie, gypsy and free-spirit.

“At first my family thought I was crazy because I was changing everything so fast,” Tate said. “I quit a job that everyone wanted and would have had me set in the material sense for the rest of my life.”

Though he believes now that his family understands that he is more content than he has ever been.

As he travels to new places, he’s tried to to learn at least basic conversational skills in several languages. While speaking Spanish fluently, Tate has also been able to have basic conversations in Thai, Indonesian, Korean, Norwegian and French.

“It’s way more exciting and fulfilling than the way I was living before,” Tate said. “I feel like my life is a nonstop movie, but actually way more exciting than any movie I’ve ever seen. I am able to be free and grow while doing good things for people around the world.”

Community is important to Tate. He spends his days trying to find a balance between reading and writing and teaching classes, organizing events, facilitating festivals and doing volunteer work. He hopes to one day live in a community where people live together in harmony rather than living for money and material.

“I dream of creating the first ever eco-town, which is using many of the principles people have adapted for small eco-villages and communes and expanding it to be applicable to a full town with a main street and park open for anyone to visit and expand,” Tate said.

For now, Tate goes wherever life takes him.

“I strongly believe in the power of the universe to give me guidance though signs and synchronicities,” Tate said.

He makes his way home to work at the Christkindl market in Chicago every winter but spends the rest of the year doing what he loves.

Tate realizes that traveling isn’t for everyone, especially traveling nearly nonstop, but he believes everyone should give themselves the opportunity to see something different from what they’re used to.

“The important thing I realized is that travelling doesn’t always mean moving your body, it can also mean travelling with your mind and always being open to the next idea or inspiration that comes,” Tate said.