A look into ECC’s non-traditional students 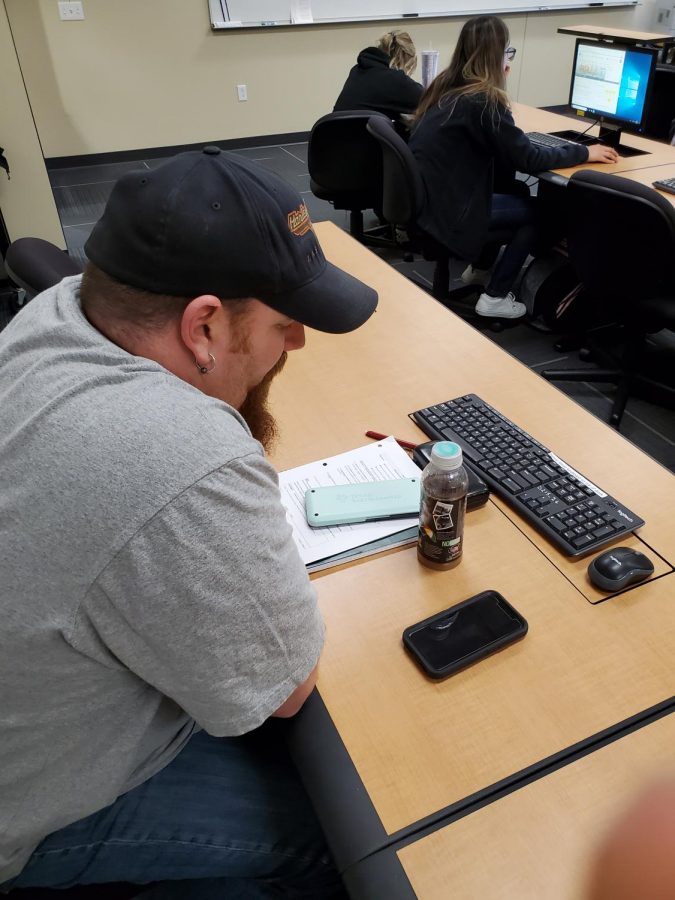 “That was my one day that mattered,” recalled John Michalek, a student at Elgin Community College.

Michalek was on vacation with his wife in Australia when he noticed a child walking out of the hotel without his parents into the street.

“Wait, am I the only one seeing this?” said Michalek.

Michalek stopped the child from wandering outside and searched for his parents, finding out that the father was in the hospital sick while the mother was there as well.  Michalek is one of many older students at ECC returning to college to work towards a new goal.

A graduate of Niagara University’s math program and Depaul University’s computer science program, Michalek is returning to school to become a nurse.  Although he’d been out of school for a while, Michalek claims that the experience gained in his career has helped him since returning to college, crediting the fact that in his line of work, he was always learning more and more.

“Through work, there’s always some type of education you’re going through,” Michalek said.

Before coming to ECC, Michalek most recently worked as a systems engineer at Cisco, dealing in technical sales and providing post-sale support. Due to the demands of the role, Michalek was on call all the time, once having to wake up at 4:30 in the morning to help one of his customers. Michalek was inspired to become a nurse after his father’s passing.

“When you have a parent or someone close to you pass away, you kind of start thinking about yourself,” said Michalek. “You kind of go ‘What am I gonna do with the time I have left? How do I make a difference?’”

Michalek was recently accepted into the nursing program here at ECC and is looking to graduate in the next few years. Michalek’s ideal role after graduating would be in geriatric care, specifically hospice care.

After over 10 years, he returned to the school after a severe back injury ended his career driving trucks. Marin returned to finish his degree and began tutoring other students, leading to him working as an adjunct professor for two and half years before becoming a full time teacher.  Now with two associate degrees, two stationary engineering licenses and multiple certifications, Marin continues his quest for two more associate degrees and a bachelor’s degree as well as a robotics programming certificate.

Meleny Vargas is a 29 year old accounting student in her third semester back at college. After two semesters at Harper College after graduating from high school in 2008, Vargas dropped out due to financial reasons and entered the workforce. After years of working full time, Vargas noticed that jobs she knows she has the ability to do weren’t hiring her because of her lack of college degree. She’s worked for five years as a home-school liaison, a job that only required a high school diploma.

Though she learned to love her current job, she chose it for the stability it offered rather than because it’s what she wanted.

“I plan to find a job that I feel like is worth it for me,” Vargas said. “Something that can not only help me in the future but continue to help the community.”

To Vargas, that job is forensic accounting. If everything goes according to her plan, she will have her degree by fall of 2021.

A 15-year-old ECC student, Jacob Secrist, was home-schooled for most of his life. After speeding his way through high school, he took an early start to his college career, majoring in physics.

Secrist is currently working on his second semester at ECC, with plans to finish in May of 2022. After graduating from ECC, he plans to continue his education by earning a Ph.D in physics before becoming a professor in the same subject at a university.

As part of ECC’s student body population, Marin, Michalek, Secrist and Vargas have been welcomed by their fellow students.

“I have felt very welcomed here by many students,” Secrist said. “I like this school and I enjoy coming here.”

“When I see myself when I’m with other students, I don’t see myself as a 62 year old,” Michalek said. “I just view myself as kind of where I was when I started college my first time, but then I look in the mirror and I’m like ‘oh wow, who is that guy?’”

“At first it was awkward, but it doesn’t bother me,” Marin said about being the oldest student in his classes.

Although these students are either older or younger than the majority of ECC students, they all claim that other students don’t treat them differently due to their age.

Michalek’s classmates said to him “You’re just another student. We’re learning together.”