Student-made mural to be painted in ECC library 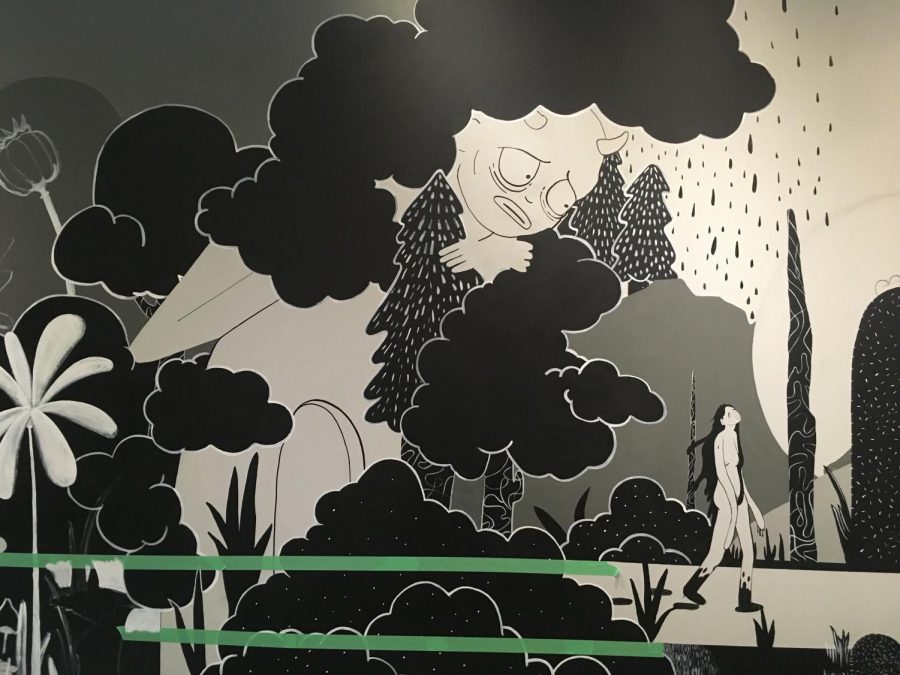 A portion of Reyes-Carrillo's half of the mural, depicting a woman on a journey filled with unknowns and insecurities. Upon the print date, the mural is a work-in-progress.

Previously hidden in sketchbooks or on canvasses, the art of Yetzy Reyes-Carrillo and Josh Selvig, two current art students at Elgin Community College, will make its way into an elaborate mural in the Renner Library Hallway Gallery at ECC.

The work is a collaborative piece between the artists, with each artist working on their own piece on opposite ends of the wall, complete with a combination of both pieces in the middle.

The mural is expected to be done in early April and will be in the library through the summer.

“The mural depicts a woman shedding from her skin and leaving behind her insecurities,” Reyes-Carrillo said. “She embarks on a journey although filled with unknowns. It’s most definitely inspired by my current state of mind and perspective on this point of my life.”

To create this piece, Reyes-Carrillo is hand-painting her characters with house-paint, filling in each paint with different shades of gray.

“Grey-scale seemed appropriate because it’s what I’m comfortable with, while the actual design for the mural started with one key image: the woman with the limp arms,” Reyes-Carrillo said. “I tried to feel what she was feeling, and it evolved from there. She shaped her environment.”

Selvig’s portion of the mural takes a much different approach.

“[The mural] is, overall, honestly a representation of my artistic journey and the inspirations I’ve had that created my style,” Selvig said. “I’m mostly inspired by old cartoons and stream-of-consciousness or sketchbook feel artwork.”

Selvig’s work comes to life by scanning the original sketches into a computer, enlarging then, blacking out the linework, then making stickers out of the prints by sending them through a vinyl cutter.

Both students have taken multiple semesters of art classes at ECC, so when gallery director Juan Fernandez approached Joel Peck, 2D art coordinator and art professor about showing some student work, Peck didn’t hesitate to give his students that opportunity.

“Juan and I were talking, you know, maybe we could have something… that goes beyond [just] framing pieces, and my thought went right to these particular students,” Peck said.

According to Reyes-Carrillo and Selvig, they began working on the mural around the beginning of the semester, but planning the project actually began last semester.

“Once Fernandez and I realized the magnitude of what they were doing, Fernandez made the decision to shuffle some other show, and was supportive of finding other locations for the shows that were supposed to be in the library.” Peck said.

Working in such a big space has also been a new experience for both Reyes-Carrillo and Selvig, as both artists typically work with small-scale drawings and designs.

“This is honestly my first larges-scale piece…I usually draw small scale designs,” Reyes-Carrillo said. “In comparison, this is quite a different experience because you truly immerse yourself into the piece because you’re literally in its personal space. The piece is bigger than I am! But it’s really been such an intimate experience between me and my art.”

Selvig’s designs usually derive from sketchbook drawings, some as small as only a few inches big.

For both Reyes-Carrillo and Selvig, it’s also their first time collaborating with another artist to create something – much less on a large-scale piece.

“This is my first time collaborating with another artist on a large scale like this…so it’s been awesome to work with another like-minded and incredibly talented artist!” Selvig said.

With only a few weeks until the expected opening of the show, both artists have been working near constantly to make sure they finish on time. Whether it’s between classes or just whenever there’s a free moment in their schedules, Reyes-Carrillo and Selvig are in the library painting, pressing vinyl stickers to the wall and refining their ideas.

Despite the pressure, though, the experience has been fulfilling.

“Balancing being a full-time student and painting something so large-scale has most definitely been frustrating and gratifying at the same time,” Reyes-Carrillo said. “It’s frustrating because of time constraints but gratifying because I get to see my vision and the process of “bringing it to life” unfold.”

The experience has not only been emotional for the artists, but for Peck, who’s watched them grow as artists over the course of several semesters.

“Seeing them do something this successful, makes you proud, you know?” Peck said. “I feel like they’re feeling excitement and validation with this, too, just with the excitement and interest that people have in it. It’s creating a buzz.”

Some of that buzz is thanks to a single sticker that was put on the wall.

“About three weeks before they really started to build the mural, Josh put up one sticker, just one face,” Peck said. “And it was on the wall for a week, or maybe even two weeks before other things went up, and instantly people were posting it on Instagram and Twitter… so there was kind of hype before it even started.”

However, despite the hard work of the artists and the buzz from students, the installation will only be available until August of 2020. But this could potentially lead to permanent student-made installations down the line.

“With the support of our gallery director, I know he is very much interested in having permanent installations.” Peck said. “We’ve got too many blank walls in this building.”

But even having a temporary installation has created opportunities for the artists. Even with this being her first large-scale piece, Reyes-Carrillo has already been contacted by someone who wants mural done for them.

With such a large-scale project going on, and with discussions of potentially permanent installations being created in the future, this current project has helped other art students realize the opportunities that there are at ECC.

“Just hearing Reyes-Carillo and Selvig talk about the mural is inspiring, I think, for other students,” Peck said. “It’s been an an awesome experience as far as other  students who are in earlier semesters, getting an idea of what some of the possibilities are.”