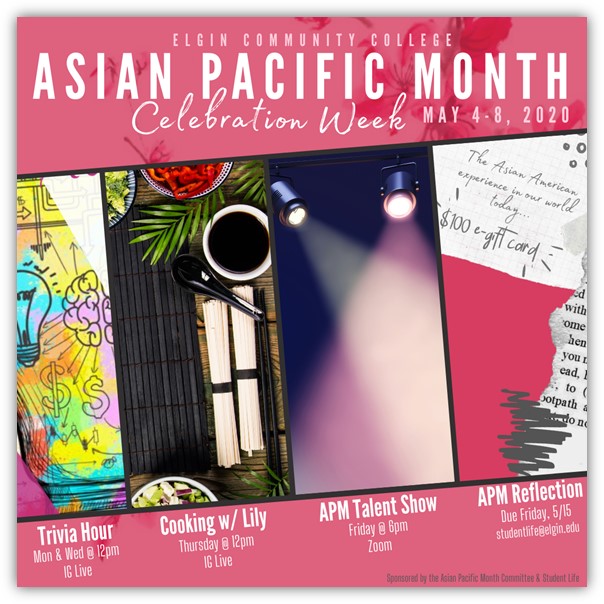 The Asian Pacific Heritage Month committee had to think outside the box to host events that could be done entirely remotely.

Every May is Asian Pacific American Heritage Month, meant to celebrate the heritage of Asian and Pacific Islanders in the United States.

According to Asianpacificheritage.gov, this is a rather broad term.

“The month of May was chosen to commemorate the immigration of the first Japanese to the United States on May 7, 1843, and to mark the anniversary of the completion of the transcontinental railroad on May 10, 1869. The majority of the workers who laid the tracks were Chinese immigrants,” according to Asianpacificheritage.gov.

Every year ECC celebrates the month with different events, though this year was different.

“The ECC Asian Pacific Month (APM) is typically celebrated for 3 weeks in April culminating to a closing event that is in collaboration with the Multicultural Education Outreach Foundation. This year, we decided to host a virtual Asian Pacific Month Celebration week during the first week of May. We celebrate APM in April at ECC due to finals week in early May; nationally, it is celebrated in the month of May,” said Gaea Atta Moy, student life coordinator and committee chair for the Asian Pacific Month Committee.

Due to campus being closed the celebration had to be completely changed.

Despite the change of plans the month was still enjoyable for students and teachers alike.

“All the events were a great way to celebrate Asian Pacific Month for varying audiences,” Atta Moy said.

For more information on Asian Pacific Heritage Month you can go to https://asianpacificheritage.gov