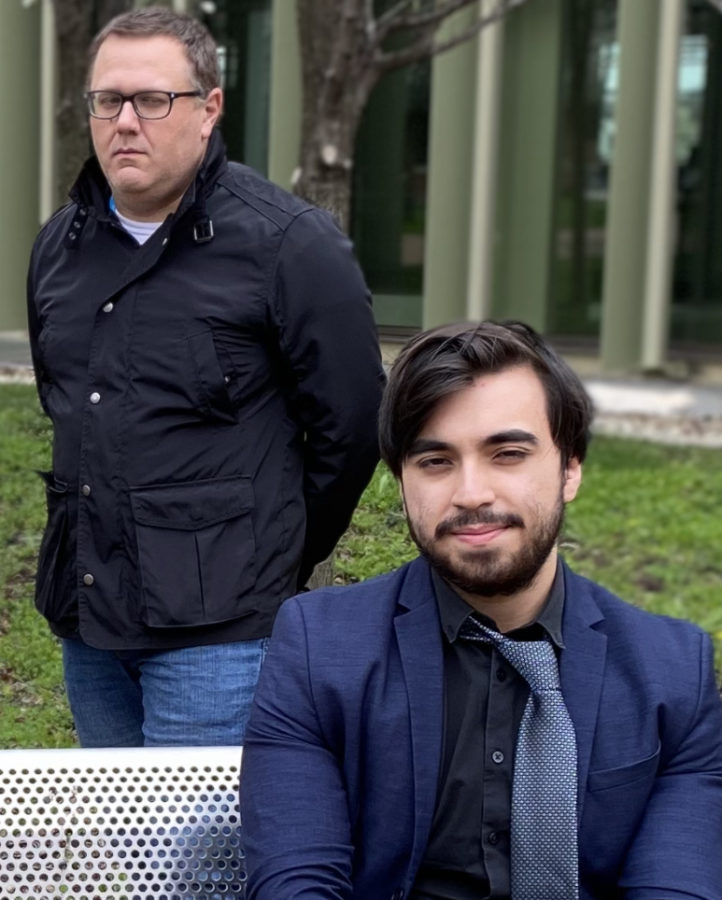 The Phi Rho Pi National Speech and Debate Tournament was held virtually this year. Other ECC Forensic Team members Damaris Zamudio and Aleah McManis also competed, both missing advancing to the national semi-finals by one point each in Extemporaneous Speaking.

“The term ‘crazy year’ also implies to collegiate speech, as live, in-person teams and tournaments turned into Zoom rooms,” said Tim Anderson, associate professor of speech/communication studies and Forensic Team head coach. “While many teams shuddered, ECC’s team responded to the switch with passion and excitement. These students worked tirelessly from day one, and that hard work and coachability led to some amazing results at  nationals. Lukas, specifically, started working on his Informative speech in April of 2020 – long before the competitive season began. He was always excited to work to perfect his message and his delivery which paid off with multiple tournament championships during the 2020-21 season and an eventual National Championship at the Phi Rho Pi National Speech and Debate Tournament.”

The Informative Speaking category is described in this manner: “The purposes of the informative speech are to describe, clarify, explain and/or define an object, idea, concept or process. (A speech explaining the nuclear test ban treaty would classify as an informative speech, while a speech giving a value judgment or advocating a position condemning the treaty would classify as a persuasive speech). Audio-visual aids may be used so long as they do not interfere with the speaker’s ability to communicate effectively with the audience.”

“Historically, the relationship between communities of color and law enforcement has always been tense. Yet, over the past couple of years, as instances of police brutality become more widespread, this relationship has been further strained. The killings of Eric Garner, Breonna Taylor, George Floyd, and other victims have galvanized the discourse about police reform in America. Following the international protests sparked by Mr. Floyd’s death, some advocates have begun urgeing for the defunding of police departments.While many conversations about this issue tend to be argumentative, what is interesting is that many people still admit that they are unsure of what police defunding really means therefore before we debate this issue we must understand it. This is a significant, difficult conversation that must be had as it may not only shed light on how to lessen the impact of racial disparities, but also on how to better the dangerous, necessary job done by law enforcement officers all around the country. Today, to be better prepared for this difficult conversation, we will first examine the definition and the shared beliefs about police defunding, then we will explore where it has already happened, and finally contemplate its implications.

“First, to understand police defunding, we first have to define it and then explore the shared beliefs about it. The first definition of police defunding originated from Sociologist W.E.B Du Bois, the first African American to earn a P.h.D from Harvard. In 1935, Du Bois published Black Reconstruction, in which he theorized that by shifting resources from prisons and police departments, to public services such as hospitals and schools, communities of color would be better served by the government. According to a June of 2020 Times Magazine article, for decades that idea was dismissed. However, following the death of Mr. Floyd, and the popularization of the Black Lives Matter Movement,  Du Bois’s idea finally gained traction and mainstream interest. According to a June 2020 report from the Brookings Institute, DuBois original definition of people defunding is similar to today’s definition; not the abolishment of police departments, but rather a compassionate review of the allocation of funds within our municipalities. The shared beliefs about police defunding also may shed light on the issue as well. Most Americans are aware of the need for police reform, but,  by and large, draw the line at police defunding…or so they think. According to a June 10, 2020 YouGov and Huffington post  Only 27% of Americans support defunding police departments. Interestingly enough, According to a The Economist’s July of 2020 poll, when police defunding is not referred to as such, but rather “police funding reallocation ” the approval of the idea jumps to 76%. . In short, police defunding is the purposeful appropriation of funds away from police departments to other governmental agencies, an idea that most Americans seem to abhor solely based on its name.

“Now, let’s examine two cities: Vallejo, California that outlines the drawbacks of police defunding and Camden NJ that outlines its boons. Following the 2008 financial crisis, Vallejo, California filed for bankruptcy and, according to the Washington Post in June of 2020, defunded its police by nearly 50% of its original budget. Inadvertently, the defunding worsened the tension between the police and the community as reports of excessive use of force skyrocketed and, Vallejo, as stated by the previously cited Washington Post, has become the epicenter of police brutality. Dante R. Quick, a baptist pastor, and community leader, noted that the police department is “woefully defunded–leading to overworked, underpaid, and therefore under qualified police officers’ ‘.

“On the other hand, in 2013 Camden, New Jersey, after efforts by local and state officials, disbanded, defunded and replaced its police department with a cost effective, de-unionized county wide police force. According to a Politico article from June of 2020, the benefits from this move have been tremendous. First, Camden saved almost 90,000 dollars per police officer which allowed 36 million dollars  to be shifted away from its police departments to education and infrastructure. Furthermore, because policing was cheaper, the city of Camden was able to keep the same amount of police officers as before. A CNN article from February of 2014, written slightly after the Camden Police reform, noted that Camden had the highest crime rate in the nation. Six years later, the New York Times reported in June that in Camden violent crimes had dropped by 42% and total crime by 44%. By looking at the examples of Camden and Vallejo, we can see what the actual effects of police defunding may be in cities across the United states.

“Finally, let’s examine these implications of these effects. In comparing Vallejo and Camden, we see that both defunded their police departments, but had radically different outcomes. The key differences between the two cities, that lead to their divergence in result, is the fact that Camden reallocated its funds after defunding it’s police department, but Vallejo did not. In other words, Vallejo did not defund its police department as defined by Dubois, which illustrates the dangerous implications of police defunding . Yet, these dangers do not lie in the effect of police dufning on crime rates, but rather its negative impact on instances of police brutality. According to the FBI’s Uniform Crime Reporting program, in Vallejo, since the police budget cut, crime rates have not increased. This is most likely because as the justice policy institute noted in its 2017 report total police funding and crime rates are weakly correlated. On the other hand, Camdeen shows  the implications of police defunding how police departments operate . According to a CNN article from July of 2020, in defunding its police department the city of Camden went on to adopt policing with a larger reliance on technology–including license-plate-reading cameras, and a city wide web of CCTV units. Furthemore, this same CNN article notes that, in Camden, general police reform has been easier after the defunding. This is because the defunding made it possible to disband the police union, which largely, through the power of collective bargaining, prevented policing reform. Which is interesting to consider how this may function in big cities like Chicago and New York where union membership numbers in the thousands.  In reviewing the implications of police defining, we come to note that its implications areremendondous, having impacts on the relationship between police and communities of color as well as on things like collective bargaining.

“Today, we examined the definition of police defunding, explored real cases of it, and outlined its implications. Regardless of your own personal beliefs about this issue, it is important to become informed about police defunding because this is a conversation that will likely not be erased from society until systemic racism and implicit bias are likewise erased. It’s impossible to know what will happen until the defunding happens. However, before we debate an issue, especially one concerned with injustice and the work of law enforcement,  we must first and foremost understand it.”