“There’s no time to waste.” The importance of ECC Theatre’s upcoming “Baltimore” 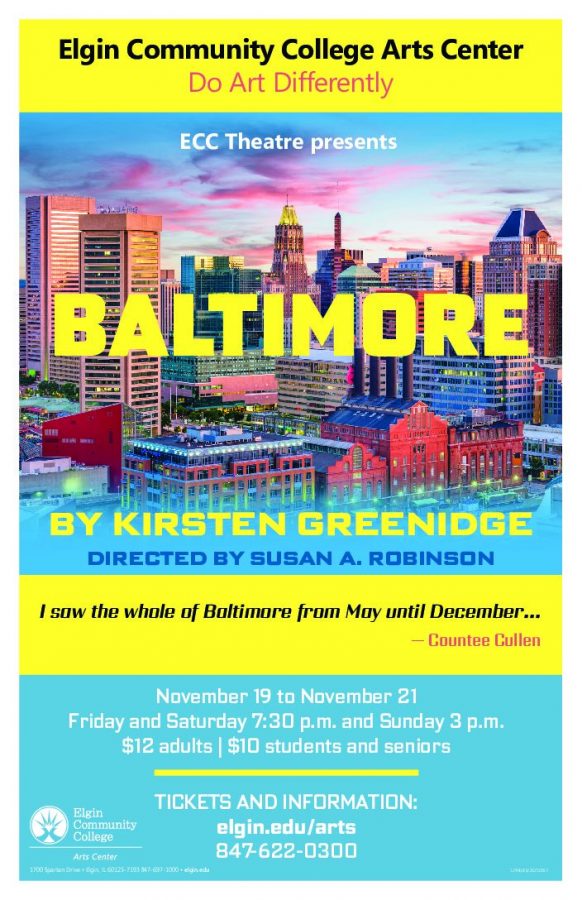 “I saw the whole of Baltimore from May until December…” is a quote from Countee Cullen’s poem “Incident” and is the inspiration behind the title of playwright Kirsten Greenridge’s show, “Baltimore.”

“Baltimore” is the story of a racially charged incident instigated by students at a fictional college campus. The incident propels the characters of “Baltimore” to question their own ways of thinking, challenging the audience to join them in the process.

The themes and messages in “Baltimore” encourage discussions about race and social injustice.

“Baltimore” director Susan A. Robinson, associate professor of theatre, said she wanted to use her position as an artist to help facilitate change.

“There’s no time to waste,” Robinson said. “The world is on fire and it is just getting worse. So I have to use what I have been given, which is my platform, to help the world be better. So I almost always choose plays that have something to say that’s going to change people’s minds, something that is going to challenge people. I am always trying to bring diverse voices to the platform I have been given.”

According to Robinson, “Baltimore” has a really diverse cast with mostly female leads, three of which are Black, which is rarely found.

Robinson also mentioned how the college campus setting, unique complexity and cultural relatability of the show allows “Baltimore” to be accessible and relevant to people who have never participated in theatre before, setting it apart from typical works that deal with social injustice.

“They get to tell their own stories,” she said. “It becomes even more powerful than normal theatre.”

Just as this show is the story of its characters and the actors behind it, Robinson ultimately plans on letting her cast and crew guide the outcome of their telling of “Baltimore”.

“There is a lot in ‘Baltimore’ that is not my story,” Robinson said. “So I have hired some designers of color and I have a fabulous stage manager who is African American. I have colleagues and friends that are going to…come in and tell me if I’m heading in the right direction. I’m gonna hopefully have my cast really lead the way with this production.”

Robinson stressed the importance of working with others to ensure proper cultural and racial understanding.

“Normally a director is shaping everything, but this play has to be our vision,” she said. “Because I am a white woman of a certain age, getting in the play and understanding the point of view is more challenging than, say, a play written by someone like myself. So, making sure I stay open and listening and making sure that my cast and my designers and my stage managers are leading the way – that’s gonna be challenging.”

Despite this new challenge, Robinson expressed excitement to see what her cast and crew have to bring to the production.

The topic and current relativity of “Baltimore” certainly brings many questions and thoughts to the table. The play brings two different sides to a story, primarily stressing the importance of one but still offering an explanation for the other. Robinson recognized this interesting take on the play.

“I think that the audience -depending on who is in the audience- is gonna have different feelings and different views on what they’re seeing and that is exactly what theatre should do,” she said.

With these anticipated feelings and views from the audience, and with her cast and crew’s opportunity for creative assertion, Robinson is anticipating a window for discussion.

“I hope at the end of the play we have real conversations,” she said. “I hope ultimately that’s what we all choose to do because of this play: show up, see it, talk about it, and to not put blinders on and turn away and pretend that doesn’t happen because that is not getting us anywhere. We have to talk about this. There is no time to waste. It’s not just about doing a good production where people go, ‘Oh they were really good!’ but that hopefully they will be moved enough to know that there is a bigger purpose that something else has to happen.”