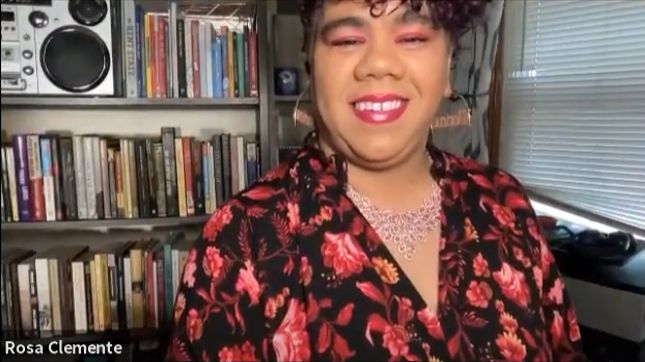 Rosa Clemente addressed students from across the Chicagoland area on an Oct. 7 Zoom webinar.

Rosa Alicia Clemente did not begin to identify as Black until she was 28 years old— a decision that did not come easy for the proud Puerto Rican.

“I far too often [am] confronted and accused of selling out as a Latina,” Clemente, now 49, said to a Zoom audience. “Too many times, [Afro Latinx people] are told by our own people that we have to choose between our racial Black identity or our ethnic one.”

A leading scholar in the issues of Black Latinx identity and an Afro Latina herself, Clemente has an extensive background as a journalist, activist, and U.S. Vice-Presidential candidate. Students and faculty from nine community colleges in the Chicagoland area gathered virtually to hear her speak on Oct. 7.

In the span of an hour, Clemente wove personal anecdotes of self-discovery and statistics of Black Latinx erasure into a passionate speech, imploring listeners to widen their understanding of intersectional identities and their accompanying experiences.

“What so many movement people, leaders, foot soldiers and woke folks fail to understand is that in America, the binary of black and white has always excluded [Afro Latinx people] and other Black people from the diaspora,” Clemente said.

Clemente’s focus remained on her audience as she spoke, rarely breaking eye contact from her webcam when directing statements at students in attendance who were Black, Latinx or both.

“As young people in the prime of your [lives]…at the end of the day you have to take responsibility for your community,” Clemente said. “You have to become part of a culture of organizing. It has to be in your DNA. It’s in your daily life. We cannot allow white supremacy to break us.”

It was remarks like these that seemed to resonate the most with those in the audience. During the Q&A session that followed the scholar-activist’s speech, several people from each college shared how Clemente’s message inspired them.

“My own experience growing up in predominantly white schools during grade school, middle school, high school, our stories were never told in our classrooms,” said Jesus Molina of Harper College. “So, thank you again for sharing your knowledge so that we can learn and raise our voices.”

This raising of voices was an invitation Clemente extended to the audience several times throughout her speech. She stressed the importance of those who identify as Afro Latinx speaking out about their existence so Black members of the Latinx community are acknowledged respectively as such.

But Clemente’s unwillingness to abandon either facet of her identity for the sake of belonging- and confidence doing so- was only another source of inspiration to those in the audience.

One such inspired attendee was Samantha Amaro, a first-year student at Elgin Community College who said she is starting to feel more comfortable claiming the Latinx label after attending Clemente’s speech.

“I think the biggest part that has resonated with me even a few weeks later is if I want to feel more comfortable in my own skin, I have to just continue to learn and educate myself by reading and going to events like this, and not simply walking away from a part of me because it makes me uncomfortable,” Amaro said.

Self-education through reading was the one piece of advice Clemente gave to all of the young people streaming the event.

“Read real books,” she said, gesturing to a packed-full bookshelf behind her. “That’s my advice. … Really, you have to read books. You have to understand methodology. … If you’re just going off 140 characters [on Twitter] and watching TV or whatever, you don’t know the vast history of particularly Afro-Black Latinx people here and throughout the world.”

According to Clemente, this education is the only way to ensure visibility of Black Latinx people. While conversations surrounding Latinx identity have begun, Clemente insisted they are incomplete if they do not acknowledge the intersection of the Black diaspora. Clemente’s passion for this subject underscored every word of her speech, emboldening faculty and students alike.

“It was really empowering…to see how much she has been able to do for herself,” Amaro said. “And overall, the way she holds herself, it makes you want to believe that you can do good too—no matter how big or small.”