Learning to be Uncomfortable 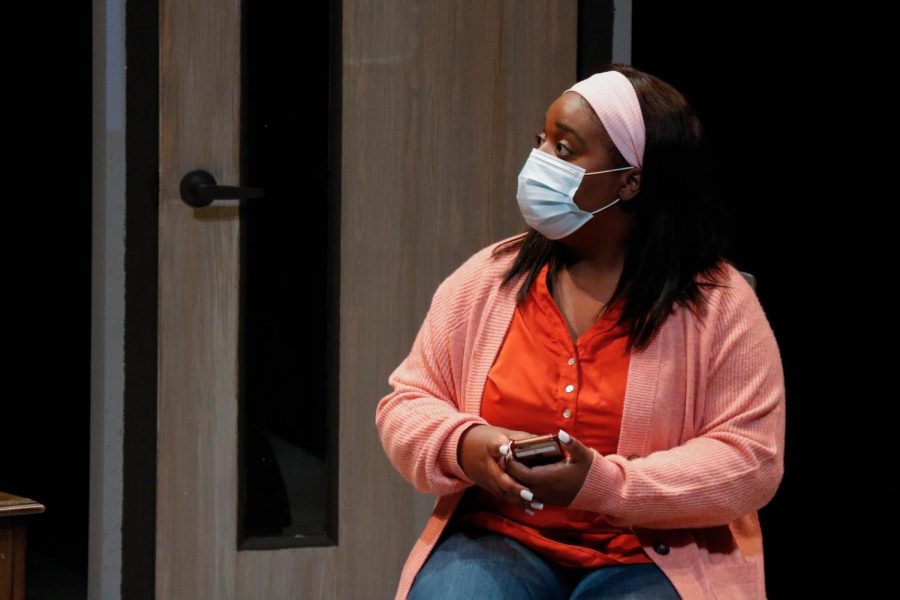 Tremeisha Gray's character, Shelby, can't silence her new phone in a scene of "Baltimore", by Kirsten Greenidge, the fall play production at ECC.

Just as it is in Elgin Community College’s purpose to educate, the school’s theatre department strives to do the same in its theatre productions.

Theatre student worker Taina Caraballo talks about that herself in the Performing Arts Club’s sneak peek presentation of Baltimore on Nov. 16 – three days before the show’s opening night.

ECC’s Performing Arts Club launched “Baltimore” with a special Zoom hosted sneak peek. The play’s story, written by Kristen Greenidge, the Assistant Professor of Theatre at the School of Theatre at Boston University, revolves around a racially charged incident on a fictional college campus. The reactions of the students carries a dialogue addressing the issue of racism. The sneak peek introduced the plot of “Baltimore,” its cast and characters, information about Greenidge, and more facts and quotes from the cast and play.

The casting of the play caters more towards an ensemble-like structure. Each voice is a different story with a different point of view.

“This is the great thing about plays in that they are omniscient. You see different angles,” Caraballo said. “You can see all these different angles that might not be understood in a one dimensional way of being. The one person’s point of view only. That’s what I feel makes this so special.”

The cast, consisting of nine speaking parts, included characters of all kinds of backgrounds.

Actor and student, Breanna Young plays Alyssa, a Black female freshman student, in “Baltimore.” Alyssa’s character directly experiences the immediate effects of Fiona’s actions. Fiona’s character is the catalyst for the racial incident that takes place in the story. During the sneak peak, Young talks about her instinct to want to be more of a friend to her character than someone who portrays Alyssa. She also capitalizes on the weight of the show’s message, stressing that room for discussion is the most important takeaway from the show.

Brett Barry is also a student at ECC and plays Carson, a white freshman male student in “Baltimore.” Barry talks about the research projects he and his cast mates conducted, discussing the importance of understanding the past while staying true to the present. He touches on the impact of what the character Fiona has done.

“Learning and growing is what this is all about even if you are the aggressor…If she could understand just that point then there’s an opportunity for growth and learning there. Hopefully the audience can see that we’re learning and growing together and as long as we’re making that commitment together, we can be better than our past,” Barry said.

Baltimore highlights the importance of conversation when it comes to sensitive topics. After each production of “Baltimore” on Nov. 19 to 20, a talk back took place in which the cast and crew could share more about the message of the show. Audience members could engage, ask questions, and most importantly seek to understand the weight of the theme of the play.

Students shared their own personal stories during the talk back on opening night. Emily Terrazas, an ensemble member and understudy for the character Rachel, a Latina freshman female student, talks about what she has learned from her own experiences.

“The older I get the more I recognize that it’s not right. It’s not right that I think this way. It’s better for me to embrace my ethnicity, embrace that I am bilingual, and that there’s nothing wrong with it,” Terrazas said.

Jordan Glover played Bryant, a Black freshman male student in Baltimore. Glover shared his personal story during the talk back. He beckons the audience to see the reality of the play’s message, offering a piece of advice.

“There’s just no way that this world would get any better if we all just take a step back from it and allow for it to continue to happen,” Glover said. “We need to confront it no matter how scared, no matter how worried about what the situation is going to turn into.”