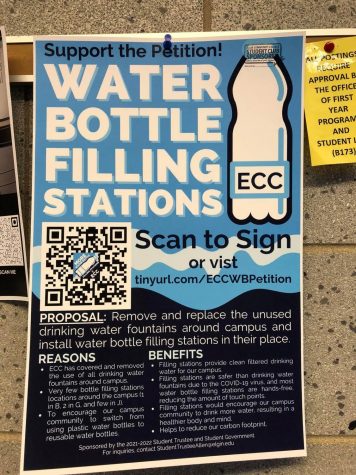 Water fountains at Elgin Community College are a necessity for students and faculty and they are once again open for use.

“We have recently opened all the water fountains on campus to support access to drinking water in addition to the water bottle filling stations that have remained open throughout campus during the pandemic,” said Senior Director of Emergency Management Emily Kies in an email.

During the pandemic, all water fountains on campus were closed with an “out of order” sign taped to each of them. The signs also stated that everyone should use the hands-free water bottle stations instead.

James Allen, ECC student trustee, had an idea after some students voiced their opinions about the closed water fountains: remove and replace the unused and unnecessary drinking water fountains around campus and install water bottle filling stations in their place.

“Someone asked about water fountains and why they are closed,” Allen said in an email. “I knew that they were closed because of COVID-19 but let them know about the water bottle station in [building] B. When I was at ECC and waiting for my class to start, I wandered around the school, out of water, and I noticed that I could not find a water bottle station anywhere.”

After this experience, Allen started a petition to get more water bottle filling stations on campus.

When you sign the petition that Allen created online, it gives a list of all the positive benefits of having water bottle filling stations, such as providing clean and filtered drinking water, along with reducing COVID-19 exposure due to the touch-free aspect. Many students filled out this petition.

“So far, the feedback has been great,” Allen said in an email. “No negative responses at all, actually. We allow people to comment on the paper and the digital petition and all have been very positive and more on the lines of, ‘Why has this not already been done?’ or, ‘This is something we really need.’”

“We have recently added two more water bottle filling stations in the gymnasium to continue to provide access,” Kies said. “Elgin Community College works to maintain a nimble and responsive approach to all student questions and concerns. We are actively looking at the most efficient and effective way to accommodate this request throughout campus.”

Students and staff now see that every water fountain is open, with the “out of order” signs taken off. But according to Allen, it was not done because of the petition.

“While it is nice that the school has reopened the water fountains throughout the school, they did not do so in response to our petition but [it] was done because the school was not in compliance with an ADA requirement for drinking fountains nor were they compliant to Illinois’ Public Health Section 890.810 for the required minimum number of water fountains in an educational building (1 for every 100 people),” Allen said in an email. “But in reality, it does not solve the issue at hand. A water fountain does not serve the same purpose as a water bottle filling station.”

“I, too, have spoken with building maintenance and have been told that for quite some time (more than 5 months now) there has been a proposal to do exactly what we are asking for, but it has been sitting on someone’s desk collecting dust,” Allen continued. “While I know the budget approval process at ECC can be arduous, this has not even been brought to the Board of Trustees for consideration, review, or a vote. I was hoping this petition would help get the process moving along but seems that we have a lot more work to do on this side of the effort.”

According to Allen, 250 students and faculty have signed the petition for more water bottle filling stations across the ECC campus, and Allen plans on getting even more signatures.

“It is not just a benefit to the students, remember we are only here for two, maybe three years, the school’s employees are here for their entire careers,” Allen said in an email. “This is something that benefits the entire population at ECC for many, many years to come.”