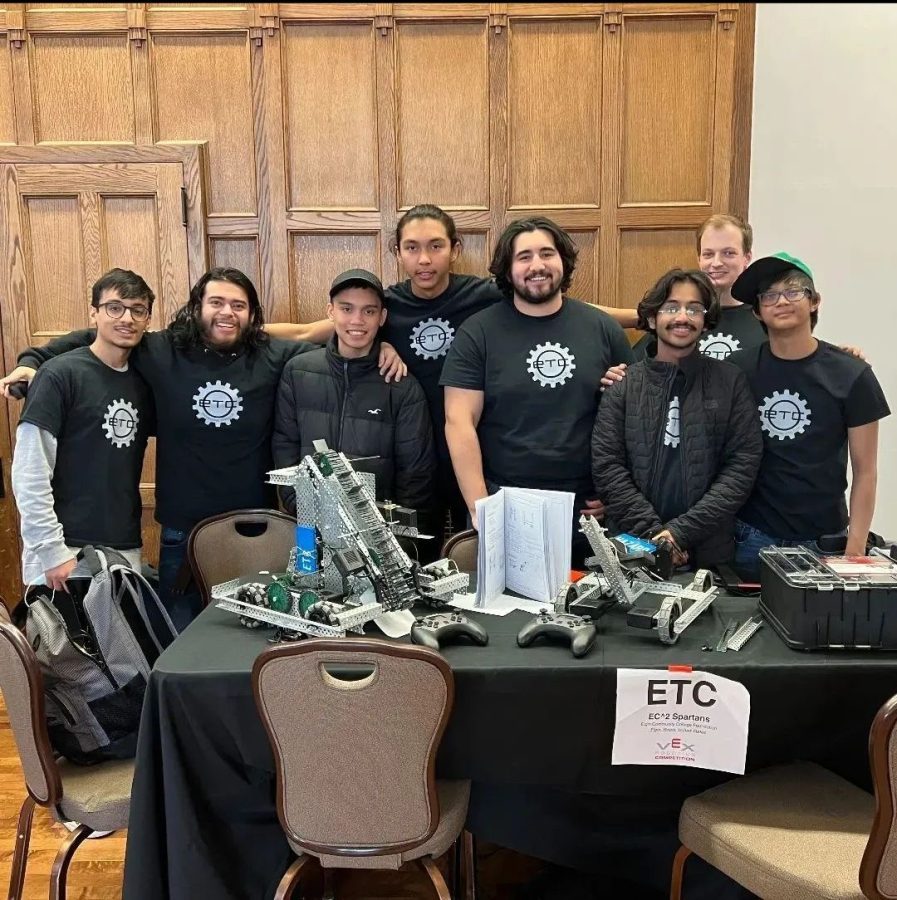 After months of designing, creating, and coding two robots to compete at the VEX Robotics competition, eight members of the Engineering Tech Club (ETC) had made the drive down to Purdue University in West Lafayette, Indiana. Jose Lopez, Jonathan Mathew, Christopher Hippolito, Zayn Khan, Nick Parkin, Giovanni Patino, Fitz Ramierez, and Eddie Toledo were full of excitement as they explored Purdue’s campus on the first day of the competition.

While walking around the competition area, they quickly realized something was wrong. Their robot was a different size in comparison to the other teams’ robots. They approached an official and found that one of their robots was six inches too short and the other was three inches too long.

With the VEX Robotics rules in mind, the members of ETC decided they could keep the robot that was too small, but the robot that exceeded the size must be dismantled and rebuilt.

“We honestly debated just turning around and going home,” Lopez said. “We were all so discouraged considering we spent almost two semesters building our robots. It seemed impossible for us to completely rebuild and code a robot in less than twenty-four hours.”

The ETC members decided not to leave and went back to their hotel in Indiana. They stayed up all night remodeling the robot to fit size guidelines.

“With our lack of time and materials, we just had to throw something together,” said Mathew, president of ETC. “It was nowhere near as polished and intricate as our original design, but it was either that or we leave Indiana and all the months of our hard work would go to waste.”

The ETC members were able to put together a new robot in time and showed up to the second day of competition, ready for anything that lay ahead. The competition consisted of 14 other teams from universities around the US, such as the Milwaukee School of Engineering, University of Illinois Champaign-Urbana, and Valparaiso.

“I thrived off the energy at Purdue,” said Hippolito, one of the main competition drivers for the robots. “Everyone was so hyped and I felt in my element. Even though we were initially discouraged when walking into the competition, it quickly faded away when we finally got to see our robots in motion.”

After several rounds, ETC ended up beating three universities, being the top Illinois school finisher. Many of the members were surprised they even beat any universities considering their situation the night before.

“I remember after our match against the University of Illinois Champaign-Urbana, we all thought we lost and were out of the competition,” Lopez said. “But then the referee went up to us and said we actually won the match 90 to 88, and the amount of joy we all felt in that moment was insane.”

The members of ECC left Purdue feeling quite victorious, but also began to reflect on the competition as a whole.

“When looking back at the competition, we knew the very moment we walked into Purdue that we would be the underdogs,” Lopez said. “We were heavily underfunded compared to some of the other universities. We worked with a very limited amount of VEX parts considering our budget, so we were definitely already at a disadvantage before our whole robot dismantling fiasco.”

“ETC as a whole lacked a lot of robotics knowledge and driver experience compared to many of the engineering schools we went against,” said Mathew. “So the fact we did not come in dead last at the competition was honestly quite the win in our book.”

Currently, the ETC has no upcoming formal robotics competition. However, they decided to hold their own robotics races, taking track inspirations from the video game “Mario Kart”, which will happen the week after spring break.

“We are hoping that with this more laid-back competition, we will get more members of ETC involved in the robotics process,” Mathew said. “We want this competition to be a fun way for members to develop engineering and teamwork skills.”

ETC is also taking part in the Craft Vendor Fair on April 5th. ETC will be selling an array of snacks, keychains, and handmade bracelets. The fair takes place in Building B Hallway from 11-2 pm.

“As we explained, we were heavily underfunded going into the Purdue VEX robotics competition,” said Matthew. “Any sort of contribution would be greatly appreciated as it will go into purchasing more parts and hopefully allow us to visit more competitions.”