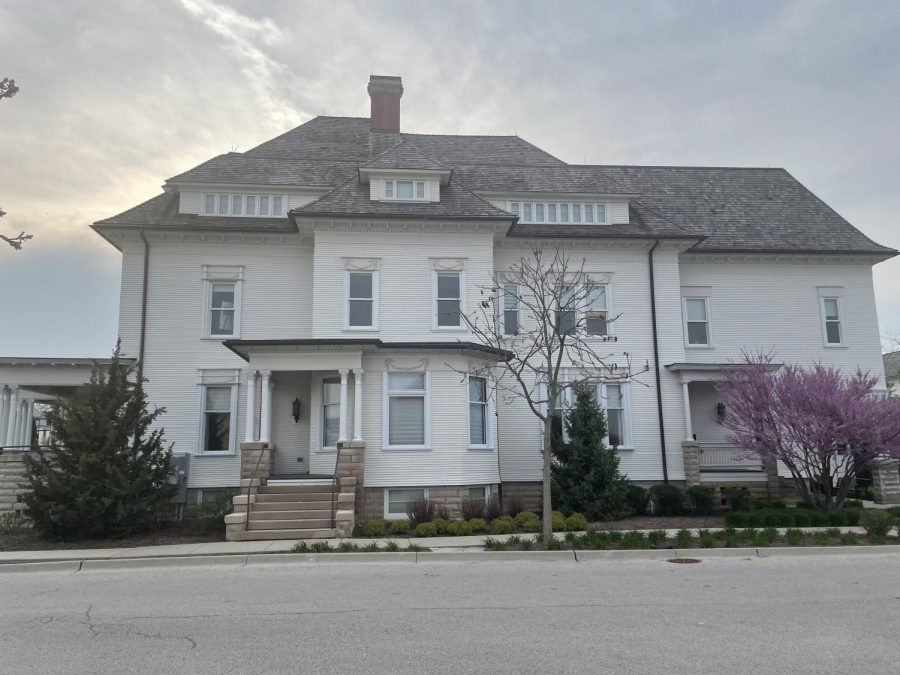 The outside of Barrington’s White House, where Courageous Conversations has been held since May of 2019.

This story was reported on and written for the Journalism 298: Special Topics course.

In May of 2019, the first Courageous Conversation meeting was on the third floor of Barrington’s White House. On Wednesday, May 11 2022, the third-year anniversary of the monthly gatherings took place at the same location.

“Gatherings are co-hosted by Rev. Zina Jacque and Jessica Green who welcome a guest expert to share their wisdom in a presentation or fireside chat-style conversation, followed by breakout dialogue or audience Q&A,” said Claire Nelson, Co-Founder of Courageous Conversations.

This particular session, called Courageous Conversations: Gathering For Peoples Supper, introduced guest speaker Rev. Jen Bailey, who spoke on her book, To My Beloveds, and her life lessons and values. Jen Bailey herself started hosting gatherings after the 2016 presidential election. Bailey said she started the meetings because she felt that many people, like herself, were worried about not only the result of the election but the state of the country in general. She said she was nervous about the polarization in the United States at the time. In these meetings, attendees would often talk over dinner about different issues and the perspectives each person had. That is why this particular Courageous Conversation event included a meal. The meal that was served was a Mediterranean dish, which consisted of grilled chicken, hummus, falafel, rice, and other foods including vegan options. At this event, however, she talked about growing up as a Black girl in a mostly white town in Central Illinois. How most people saw her and thought, based on the color of her skin, that she would be pregnant and out of school by 17. She also touched on her struggles with becoming a mother during the pandemic and around the time of the George Floyd murder. She said throughout her life she was active in social justice movements. But now with her newborn son, she realized that she needed to focus on herself and her son. However, even that was difficult, she explained, as daycares seemed to close every few weeks due to an outbreak of the pandemic.

The doors at Barrington’s White House first opened at 6:30 PM. The attendees, many of them regulars, warmly embraced their fellow guests and friends before taking their seats. The event began with Jessica Green reflecting on Courageous Conversations and its three-year life thus far. She thanked a list of people who made it possible and also thanked those who not only attended the events but also took their values and lessons learned and made a difference outside Barrington’s White House. As Green said, that is the most important part. Next up was a live music performance of Lee Ann Womack’s “I Hope You Dance” on the piano. When it was finished it drew loud applause from the 100 or so attendants. Overall, it was an emotional beginning as a few people could be seen wiping tears from their eyes. This then transitioned to Rev. Zina Jacque and Jessicca Green speaking with aforementioned guest Jen Bailey. About an hour later the listeners were instructed to speak amongst their table members, a group of about 5-7 people. The prompt was given to each guest on a table mat. One side listed an arrangement of questions in three categories: Past, Present, and Future. Each table member was to answer a question from each category. The questions, which are found in Jen Bailey’s book To My Beloveds: Letters on Faith, Race Loss & Radical Hope, included “Tell a story from your upbringing about your earliest experience with community”. As well as “What makes you feel deeply alive?” and finally “Imagine talking to your grandchildren or great grandchildren. What story do you want to be able to tell them about what you did in this moment in the story of building a more inclusive community & country?” among others. After this discussion, everyone turned to the other side of the mat. This side contained a list of roles in community building from Deepa Iyer’s, The Social Change Ecosystem Map. Everyone was told to choose a role that they felt connected to. They could see themselves as a weaver, experimenter, frontline responder, visionary, builder, caregiver, disruptor, healer, storyteller, or guide. Once they chose, the guests were told to stand up when their respective role was called out loud. At 8:50 once this activity was completed, a final Q&A with author Jen Bailey transpired. Lastly, at 9:00 PM the event was officially over however, most people stayed to chat with one another a while longer.

Courageous Conversations is held by Urban Consulate, an organization that “brings people together to share ideas for more just and equitable communities. According to their website, Urban Consulate has hosted conversations dating back to 2016. These conversations have been hosted in Detroit, Philadelphia, New Orleans, Austin, Cincinnati, and Chicagoland.

The website states, “[These conversations are] guided by the belief that sharing space for honest dialogue and the exchange of knowledge is necessary to transform ourselves, our communities, and our world.”

Building community is the overarching theme and goal of these arrangements as the people of Courageous Conversations pride themselves on building community between people of different backgrounds. This includes race, ethnicity, religion, and nationality. Rev. Jacque referred to the guests as family, as brothers and sisters. At the very least they want to lead a friendly atmosphere where people can learn.

“It’s a friendly room, people are pretty nice,” Nelson said. “I learn something new every time. The idea of being an ongoing, lifelong learner and stopping to listen [is important]. For some people, it might be boring or slow, but for others, I think it’s a good habit. To slow down and listen, learn and think a little differently.”

“Courageous Conversations started in May 2019 as a series of monthly public gatherings at Barrington’s White House to explore how to foster greater inclusion and belonging in our community,” Nelson said.

This diverse and inclusive community and the conversations that go along with it is meaningful to many people.

“[Courageous Conversations is] the best thing that ever happened in Barrington,” said Noni Brown, a member of the monthly gatherings.

“The reason I decided to join [Courageous Conversations] was because it sounded like they were going to be talking about and addressing difficult conversations,” said Jean Hansen. “Mostly I think the topic was around reconciliation and racial injustice that we wanted to address. That’s very important to me. What I gained from it is a community awareness that there are a lot of other people here in Barrington and surrounding communities that care about [racial reconciliation].”

As it says on the Urban Consulate website, “We all know the national landscape — Americans have grown more divided & unequal. Membership in civic groups has been declining while tears in our social fabric have been widening. We need invitations to come together to listen and learn from one another. That’s what we do.”

This quote also linked a story titled “The Invisible Segregation of Diverse Neighborhoods”. This article was written by Jake Blumgart, a man who grew up in a ‘profoundly unusual’ neighborhood. Blumgart and his family, who are white, grew up in a neighborhood that had a Black majority. However, even with the Black majority there still was a significant white minority. This was odd because in the 20th century when Black families started moving into a specific area most white families fled.

“Neighborhoods across the country flipped from nearly all-white to nearly all-black in the span of a decade. Mixed-race communities were rare”.

Hyra would go on to say that in a uniquely diverse part of Washington D.C. most places including schools, churches, restaurants, and barbershops are still segregated. Since these locations are still relatively rare there are no true explanations for this problem.

Tom Sugrue, professor of history at New York University said, “Given the deeply entrenched nature of racial segregation, it shouldn’t come as a surprise that even in the most racially mixed communities you’d find patterns of microsegregation”.

Blumgart would explain that although his neighborhood was mainly Black, most of his friends were white. In Mount Rainier, the city in which he grew up, a vast majority of the people of color lived in WWII-era brick apartments, while the whites almost exclusively lived in single-family homes.

The article also quotes Jesse Christopherson, a white, city councilman, “‘On paper we are so diverse, but we really are not integrated’”.

This lack of integration in even the most racially diverse cities in the United States is part of what drives Courageous Conversations.

The name “Courageous Conversations” is one that some may not completely understand.

According to professors, Amy R. Overton and Ann C. Lowry, “A ‘crucial conversation’ is defined as a discussion between two or more people where (1) the stakes are high, (2) opinions vary, and (3) emotions run strong’”.

However, Overton and Lowry believe that while these conversations can be difficult, they help over time.

“Real life examples prove their statements and the benefits of improved conflict management. One group demonstrated that teaching the necessary communication skills resulted in 10% improvement in their habits of confronting difficult issues”.

However, Claire Nelson does not see these meetings as a time for arguing, but instead finds them inspiring.

“I personally feel like our series is very inspiring,” Nelson said. “I think some people hear the title ‘Courageous Conversations’ and immediately in their head think that this is a debate. But that’s not really what it’s about. We want to inspire people with examples and stories of ways to connect with each other. I come away very inspired each time.”

She would also go on to talk about the purpose of these events.

“We believe that to live together in difference, we need to build the skills to have better conversations across difference,” Nelson said. “That means practicing curiosity, humility, hospitality, patience, and generous listening to better hear and understand our diverse lived experiences. We strive to learn and practice each month when we gather.”

Learning and communicating through differences is especially important to Urban Consulate.

Nelson also used a quote that helps explain what being courageous means to them.

“When we talk about building a courageous community, we love this quote about courage. ‘Courage is what it takes to stand up and speak; courage is also what it takes to sit down and listen’-Winston Churchill,’” said Nelson. Sometimes we think of courage as fighting, but I hope people walk away saying ‘oh sometimes courage is gonna look like listening to something that you don’t agree with.’”

“[Courageous Conversations] is a chance to really get to know other people and listen,” Benning said. “I think listening is one of the most important things that I have to work on doing. If I listen to somebody and I realize what they’re saying [is something that] I don’t believe, then I just shut them out. You can’t do that, you have to listen and then try to see where you go from there.”

As for the future of Courageous Conversations, this meeting was the last of the spring monthly meetings. They will go on “summer break” and then resume back in the fall.

“The way that people can best follow the series and get information when we do open ticket [sales] for upcoming events would be to go to our website and sign up for the email list,” Nelson said. “We send monthly newsletters with information, resources, upcoming events, past events, all [of] that.”