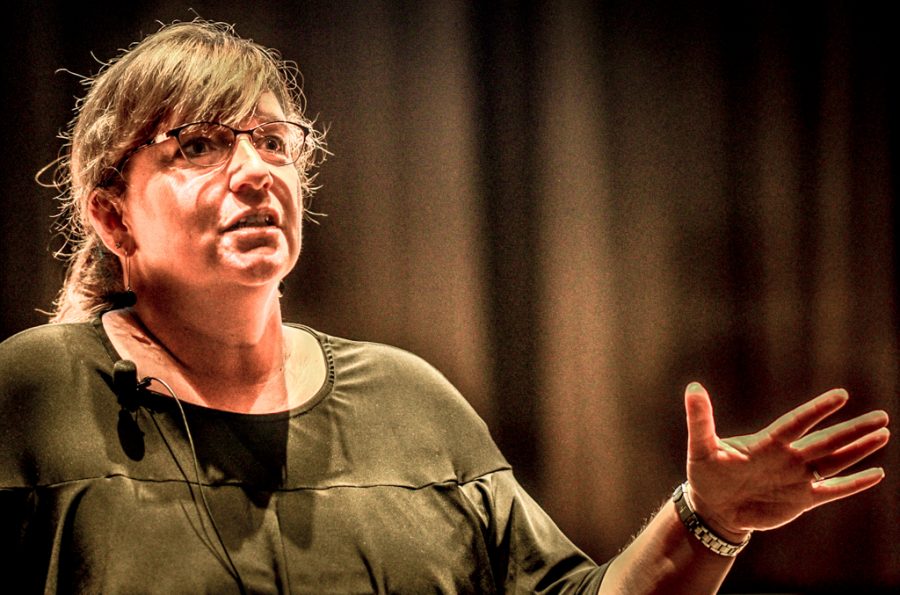 Julie Smith Webster University (St. Louis Mo.) speaks to journalism and other students in Spartan Auditorium on how to identify "fake news".

Many people claim that society is seeing the birth of a new problem that has risen with this generation.  The very news sources that society have trusted for years to give unbiased and accurate stories are becoming less and less credible with the rise in technology.

How can people adapt to a world where they must struggle to believe the validity of the very sources that are designed to deliver them the truth?

Media Literacy Professor and self-proclaimed “media junkie” Julie Smith gave a seminar in the Spartan Auditorium on Sept. 19. In this seminar, Smith discussed the evolving problem of misinformation in the media and taught students new methods to discern real news from fake news.

Smith has been teaching literacy and media related classes at a university level since 1997.  Smith also has earned her Bachelor’s degree in Public Relations from the University of Tulsa, OK and her Master’s degree in Mass Communications from Southern Illinois University in Edwardsville. Smith has spent the last three years traveling throughout North America, South America, and Europe helping teachers and parents with understanding the nature of media literacy, digital citizenship, classroom engagement, and social media.  Smith is also on the Council of the National Association for Media Literacy as well the Executive Board for the Gateway Media Literacy Project.

“The media defines the world for us, it affects how we view the world, how we the view the other and how we view ourselves.  If we don’t have an understanding of the economic structure of that, we are doomed to be mislead,” Smith said.

The auditorium was filled with students, many attended for extra-curricular reasons and others attended simply out of personal interest.

Alejandro Lopez, a student at Elgin Community College, attended the seminar hoping to increase his critical thinking skills toward the media.

Smith began her seminar by outlining what society is up against in an “misinformed world.” Smith identified it as the amount of misinformation, the design of it and the message it’s giving.

The amount of misinformation online is incalculable, people don’t have enough fact checkers and filters in the world to completely refute all of it, so we must be our own filters. With the power of mass communication, photo-editing and anonymity at our fingertips, more and more people are creating realistic looking reports and facts that support their own ideals and beliefs.  Smith stressed that this is where we must analyze the design of the information.

Smith gave many examples during her seminar, one of which included a tweet that depicted KKK members outside of what seemed like the Student Hall on campus threatening the school.

Smith immediately thought, “If the Klan was on campus, how come this guy is the only one talking about it?”

Smith dug deeper and found that a simple reverse image search revealed that the picture was over 30 years old, and googling the poster’s name revealed he was a white supremacist trying to stir up trouble.  In this case, since no one took the small amount of time to validate this tweet, the University of Missouri went on lockdown for two days.

“The ubiquity of fake news is alarming,”  said Dr. David Zacker, the head of the humanities department at ECC, “That coupled with the difficulty consumers of social media have recognizing bias – their own biases as well as that at of the media – make media literacy more important than ever.”

The spread of fake news is rampant and most of the time people aren’t usually aware it’s happening. Many people have shared a post or re-tweeted a tweet that gave a message that might not have been completely true, but they themselves agreed with.

Smith gave another example of a picture of former President Barack Obama that depicted him in-front of what the picture claimed were “Muslim prayer rugs.”  This picture was side by side with pictures of other past presidents standing in-front of American flags.

Smith again dug deeper and soon found those so-called prayer rugs were really just drapes that have been there since Nixon was in office.  The American flags were right next to Obama, but they were cropped out.  The creator of the original post clearly just had an anti-Obama bias.

“Typically, if the message is something we agree with, we’re less likely to check it for validity.” Smith said.

Getting past our own biases is the first step in identifying the biases in the media and consequently, understanding the nature of misinformation.

Smith concluded the seminar with an audience based interactive online game “Kahoot”, where each member of the audience tried to discern whether the article of picture depicted was true or not.

Lopez gained a new perspective toward the media and added what he gained most out of the seminar is to“always be skeptical about the news and always check your sources.”