It is perhaps the most epic story ever told. A story of an ancient republic, ruled by masters of a universal force, and a chancellor with a grand plan. A story of love, loss and a grand army. A story of betrayal and secrecy, leading to the rise of an empire. A story of scoundrels, princesses, dark lords and droids. A story about a boy who would take after his father and become a hero. A story of redemption, with the light finally overcoming the dark in a wonderful twist of fate.

Since 1977, “Star Wars” films have been coming out and drawing in crowds of fans to see the next installment of the saga. Now with six films out relating to the Skywalker storyline, fans are about to get another film this December when “Star Wars: The Force Awakens” premiers. 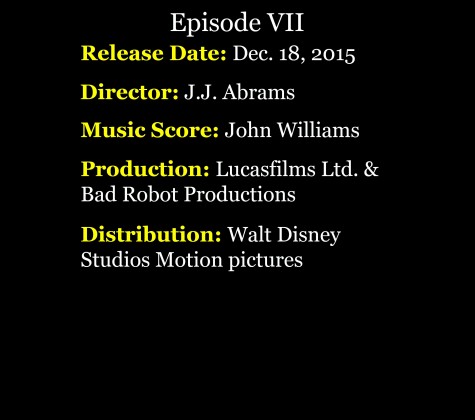 With under a month to go, fans of the franchise have been showered with trailers, toys and other merchandise that have given the world a peek of what to expect from movie director, J.J Abrams.

Just like any other reboot or revamp of a series, many changes have been made to fit the unique style of the director. Changes ranging from costume alterations, new characters, and a new storyline following the original saga have been made.

And the hype has never been more real.

“I am so excited to see what they’ll do with it and I can’t wait to see how they’ll incorporate the old characters into it,” said third year ECC student and “Star Wars” super-fan, Ronnie Rooker. “And there’s sure to be plenty of easter eggs and calls to the other movies to look forward to.

When pre-order tickets for “The Force Awakens” went on sale back in October, internet ticket outlets like Fandango nearly shut down. Reports from Deadline say that the movie took an estimated $6.5 million in domestic ticket sales overnight, shattering the previous record for online ticket sales and preorder ticket sales by more than 10 times.

Fans like Rooker and others have been eagerly awaiting an addition to the “Star Wars” story ever since the end of the prequel trilogy back in 2005.

“I’ve always wanted another ‘Star Wars’ movie,” said Rooker. “I wanted to know what happened after Vader’s fall. It can’t just end there, right? There’s always more to the story, and I want to see it.”

Many fans have high expectations for the upcoming film, hoping for redemption from the last three movies. However, the hype is leaving some long-time fans worried.

“It would be hard for them to live up to the expectations that the fans are giving them,” said second year student Zain Azmi. “I may be wrong because I haven’t seen the new film, but I think it’s too hard, and will not be as good as the previous ones.”

“The Force Awakens” has some kind of an edge on the prequel trilogy, however, by continuing the story, not preluding it. By including actors and locations from the original trilogy, Disney has an incredible opportunity to bring together 3 generations of “Star Wars” fans.

“I think Disney will do fine with the new movie as long as they stay true to the old fans,” said second year student and fan of the franchise, Eric Henricks. “[I think Disney will,] considering they brought back Harrison Ford.”

Whether or not “Star Wars” is a story that needed to be continued, it is safe to say that the world will be watching to see how successful “The Force Awakens” becomes. Soon, generations of “Star Wars” fans will be waiting to delve back into the lives of the Skywalkers. And while the “Star Wars” galaxy might be far, far away, the movie’s release definitely is not.